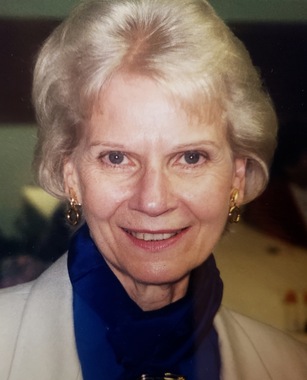 Back to Shirley's story

Shirley (Peters) Wetzel, 85, of Mountaintop, passed away on Feb. 11, 2020, from complications of progressive supranuclear palsy at Smith Health Care in Mountaintop.
She was born Oct. 21, 1934, in Mount Pleasant Mills, a daughter of the late John C. and Lottie (Stroup) Peters. On June 16, 1956, she married Lee E. Wetzel who also resides at Smith.

Shirley was a 1952 graduate of Selinsgrove High School.
She worked at the high school as a secretary until getting married to Lee and moving to Paoli, Pa. She worked for several years as a library assistant at Green Tree Elementary School in Malvern. Shirley and Lee moved to Mountaintop in 1984 and Shirley became a valued volunteer at Christ United Methodist Church and Marian Sutherland Kirby Library, both in Mountaintop.

In addition to her husband, Shirley is survived by two sons, Keith D. (Kathleen) Wetzel of Shillington, and Kerry L. Wetzel of Malvern; two grandchildren, Christopher A. Wetzel of Chicago, Ill., and Megan E. Wetzel of Conshohocken; one sister, Ruth (Lloyd) Kreiser of Palmyra; and several nieces and nephews.
She was predeceased by three siblings, Vera (Peters) Dietz, Earl Peters, and Doris (Peters) Sprenkel.

The family wishes to express gratitude to Smith Health Care for the compassionate care showed to Shirley during the last years of her life.

A visitation will be held from 10 to 11 a.m. Saturday, Feb. 15, at Christ United Methodist Church, 145 Disciple Drive, Selinsgrove, followed by the funeral at 11, with the Rev. Ryan Gephart officiating
Interment will be in St. Thomas Cemetery, Mount Pleasant Mills.

Send flowers
in memory of Shirley

A place to share condolences and memories.
The guestbook expires on May 12, 2020.

Steven Ghicondes
Deepest condolences to the Wetzel family with the passing of Mrs. Wetzel.
May her Memory be Eternal
Joe and gloria Calabro
Dear Lee, Keith, Kerry and family,
We are so sorry to know about Shirley's passing. She will be remembered always for her kindness. She and Lee were the first to welcome us to the neighborhood many years ago and we will miss them dearly. We would definitely be at her funeral if we didn't have a previous commitment on Saturday. May she rest in peace.
Heidi Reyburn
Lee, Keith, Kathy & Kerry - my love, prayers & thoughts are with you as you go through this difficult journey. Missing all of you and know that I am with all of you. Rest In Peace Shirley