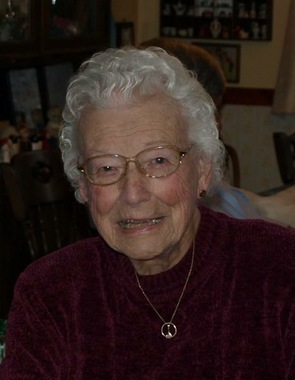 Back to Sara's story

Sara M. Loftus, 98, a longtime resident of Watsontown, passed away Monday, Nov. 11, 2019, at Evangelical Community Hospital, Lewisburg.
She was born Oct. 16, 1921, in Loyalsock Township, a daughter of the late Fuller and Anna (Nittinger) Hartranft. On Oct. 9, 1943, she married Vincent P. Loftus, who preceded her in death on Sept. 27, 1999. Together they celebrated nearly 56 years of marriage.
Sara was a 1939 graduate of Watsontown High School and a 1942 graduate of the former Williamsport Hospital School of Nursing.
Early in life, she worked at the former Philco Corp., Watsontown, at Evangelical Community Hospital as a registered nurse, and did private duty nursing at the Williamsport Hospital. After a short time working outside the home, Sara became a stay at home mother, caring for and raising her family.
Sara was the oldest member of St. Joseph Catholic Church, Milton.
She was a member of many organizations, including the Milton Historical Society, the Packwood House Museum, Lewisburg, where she was also a tour guide, the Williamsport Hospital Alumni, the Watsontown Guild, and the Parish Council of Catholic Women.
Sara enjoyed playing cards and was a member of both bridge and pinochle clubs. She was a very talented quilter, crafting many items through the years. Sara also was an avid collector of stamps, coins, dolls and other collectibles. She may be best known for her doll house restorations, turning worn houses into pristine, collector quality.
Surviving are four children and their spouses, Robert and Beth Loftus of New Jersey, Sally and Robert Gillespie of Drums, Paul and Barbara Loftus and of Connecticut, and Mary Ellen and Dave Neslund of Lititz; two sisters, Ellen Pardoe of Lewisburg and Ruth Weaver of Milton; one sister-in-law, Jeanne Hartranft, of Indiana; 10 grandchildren, David, Katie, Brian and Scott Loftus, Kelly, Robert and Casey Gillespie, Phillip, Bridget and Patrick Neslund; eight great-grandchildren; and numerous nieces and nephews.
In addition to her parents and husband, she was predeceased by two brothers, Charles "Bud" and Carl Hartranft; and two brothers-in-law, James Weaver and George Pardoe.
Friends will be received from 10:30 to noon Friday, Nov. 15, at St. Joseph Catholic Church, 109 Broadway St., Milton, where a Mass of Christian Burial will be celebrated at noon with the Rev. John D. Hoke, as celebrant.
Burial will follow in St. John Lutheran (Delaware Run) Cemetery, rural Watsontown.
The family welcomes flowers, however, if desired, contributions in Sara's memory may be made to St. Joseph Catholic Church, 109 Broadway St. Milton, PA 17847 or the Packwood House Museum, 15 N. Market St., Lewisburg, PA 17837.
Expressions of sympathy may be shared at www.cronrathgrenoblefuneralhome.com.
Published on November 11, 2019
To plant a tree in memory of Sara M. Loftus, please visit Tribute Store.

Plant a tree in memory
of Sara

A place to share condolences and memories.
The guestbook expires on February 09, 2020.

Regina Hanlon Barletta
I am so sorry to hear of your mother's passing, Mary Ellen. I hope good memories will comfort you and your family.
Mary Gillespie
Sara and I shared little notes from time to time. I always admired her great taste, beautiful creations and love for her children, grandchildren and great grandchildren. She lived her life with zest and fulfillment. I shall miss her.
Bonnie Showalter
My condolences to the family-God will provide strength during this time. From the stories shared with me, she was a wonderful person.
Mark Peoria

Blue Caribbean was purchased for the family of Sara M. Loftus by Mark Peoria.  Send flowers

Great Aunt Sara was an amazing lady.
I’ll never forget the summer I stayed at her home in 1970 with my brother and sisters. She made us feel safe and welcome. She was always present for every family event and holiday. She will be dearly missed by anyone who knew her.

Liz and Phil
Sara could hold your attention like no one else. Her knowledge, her love of family, her ability to craft set her apart from all others. She was a mother of wit and wisdom and will be greatly missed.