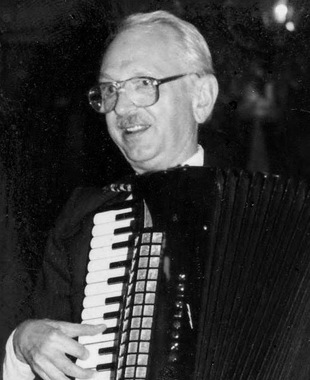 Back to Joseph's story

Joseph Csernica Jr., 90, of Lewisburg, PA formerly of Brewster, NY, passed away on December 19, 2019 at Heritage Springs Memory Care Center, Lewisburg, PA.
Mr. Csernica was born at home on December 23, 1928 to Joseph, Sr. and Anna (Dubivsky) Csernica, in Bayonne, NJ. After graduating from Bayonne High School in 1946, he attended Rutgers University where he received Bachelor of Science degrees in chemistry and business administration. He served three years in the US Air Force, which included a tour in post-WWII Germany, and advanced to the rank of captain. In 1960 he married Carol Ann Gotch, also of Bayonne. The two shared 57 years of marriage before Carol's death in 2017.
Joe's primary career was as a chemist in the paint industry, and included time at Sherwin-Williams and Sun Chemical (New Jersey), and Valspar (Minnesota), where he served as Technical Director. In 1972 Joe joined Consumers Union (New York), where he oversaw commercial paint testing and wrote associated reports and features for Consumer Reports magazine. After retirement, Joe and Carol moved to Lewisburg, PA to be nearer to family.
Music played a large role in Joe's life. He was an accomplished accordionist, starting at age 6 and later studying improvisational jazz in Manhattan with several notable musicians including pianist Lennie Tristano. While working full-time, Joe played professionally on weekends for many years, mostly in Northern New Jersey and Metropolitan New York. He also shared his talents with community and school musical productions, and Joe's accordion inspired regular singalongs and dancing at countless gatherings of family and friends.
Joe also sang in school and church choirs, and, as a dedicated member of the Byzantine Catholic Church, served as cantor and provided chant and choral instruction at St. Nicholas in Danbury, CT.
Joe is survived by son Jeffrey and his wife Mary of Lewisburg, PA, and grandchildren Peter, Timothy, and Kelly. He is also survived by his brother, Theodore, of Egg Harbor Township, NJ.
The family extends heartfelt thanks to the staff of Heritage Springs Memory Care in Lewisburg, where Joe had resided since 2015.
The Rite of Burial will take place on Saturday, December 28, 2019 at 10:30 a.m. in St. Nicholas Byzantine Catholic Church, 13 Pembroke Rd., Danbury with Fr. Ronald Hatton officiating.
Burial will follow in St. Peter Cemetery, Danbury.
The family will receive friends at St. Nicholas Church on Saturday morning from 9:30 a.m. to 10:30 a.m.
Jowdy-Kane Funeral Home, 9-11 Granville Ave., Danbury is in charge of arrangements.
Published on December 25, 2019
To plant a tree in memory of Joseph Csernica, Jr., please visit Tribute Store.

Plant a tree in memory
of Joseph

A place to share condolences and memories.
The guestbook expires on March 24, 2020.