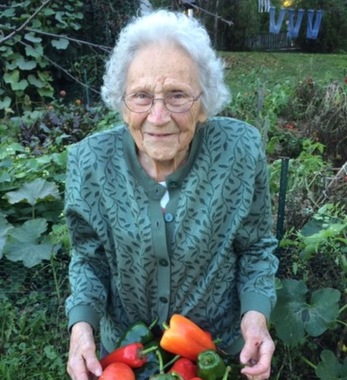 Back to Grace's story

Grace M. Hassinger, 92, of Middleburg, passed away on Tuesday, Nov. 5, at the home of her son and daughter-in-law, Ken and Sally Hassinger.
She was born March 4, 1927, in Franklin Township, Snyder County, a daughter of the late Benjamin and Bessie (Rau) Hummel. On Sept. 22, 1945, she married her high school sweetheart Carl H. Hassinger who preceded her in death on Sept. 26, 2014.

Grace was a 1945 graduate of Middleburg High School.
She had been employed at the Middleburg Silk Mill, and was an accomplished seamstress working for Guy Snyder and Gerald Wagner at their men's ware stores in Middleburg.
She was a long time faithful member of Salem Independent Brethren Church, Middleburg where she had served as a Sunday school teacher, helped with communion, and the care of the church.
Grace enjoyed gardening, her flowers, but her life revolved around her family. Grace will always be remembered as a kind, loving, charitable woman who blessed her family, friends, neighbors and essentially all who knew her with her busy hands and sharing heart. For Grace, there was no better place to be than at home with her beloved family.

She was preceded in death by two sisters, Shirley Hackenberg and Sarah Shaffer; and two brothers, Orville and Carl Hummel.

A viewing will be held from 10 to 11 a.m. Monday, Nov. 11, at the Salem Independent Brethren Church, followed by the funeral at 11, with Pastor Bob Pyle officiating.
Burial will be in Glendale Cemetery, Middleburg.

Plant a tree in memory
of Grace

Restore the guestbook to view the 2 more posts by family and friends, and share a memory or message of condolence of your own.