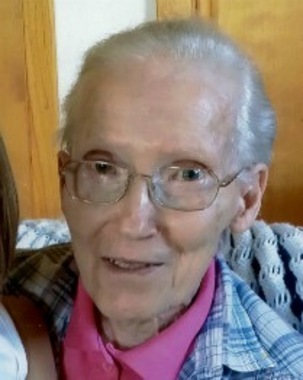 Back to Evelyn's story

Evelyn was a 1945 graduate of East Penns Valley High School.
Early in life, Evelyn was employed at the former Laurelton State Village, where she was responsible for a group of girls working in the fields. She also baby sat throughout the years and was extremely proud of her charge.
Evelyn enjoyed quilting, gardening, baking and especially baking at the Aaronsburg Dutch Fall Festival. Most of all, Evelyn enjoyed spending time with her children, grandchildren and special friends Pastor K.R. and Gina Mele.

A visitation for family and friends will be held from 10 to 11 a.m. Tuesday at Calvary Baptist Church, Penn Street, Millheim, followed by the funeral at 11, with Pastor K.R. Mele officiating.
Evelyn will be laid to rest in Stover Cemetery in Aaronsburg.

In memory of Evelyn, contributions may be given to Home Nursing Agency/Hospice, P.O. Box 352, Altoona, PA 16603-9928.
Online condolences may be sent to the family at www.stevenrnefffuneralhome.com.
Published on October 20, 2018
To plant a tree in memory of Evelyn L. Vonada, please visit Tribute Store.

Plant a tree in memory
of Evelyn

A place to share condolences and memories.
The guestbook expires on January 18, 2019.