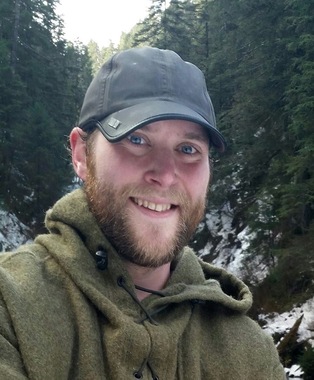 Coray Allen Harvey, formerly of Hughesville and Picture Rocks, died Monday, January 13, 2020, in Sitka, Alaska, where he'd lived for the past 7 years.
Born February 14, 1989, in Williamsport, he was the oldest son of Jeff and Mary Harvey, of Picture Rocks.

Coray truly loved the outdoors, and was a consummate fisherman, hunter, trapper, and adventurist. He had been very active in Boy Scout Troop 70 in Picture Rocks, holding many leadership positions including Senior Patrol Leader. While in scouting, he held summer positions at Camp Karoondinha, near Millmont, and Camp Brule, near Forksville. He was a member of the Order of the Arrow as well as an Eagle Scout. His Eagle project, the garden and flagpole at the creek in Picture Rocks, is well known and greets every visitor to the borough.

While he lived locally, Coray was a member of the Episcopal Church of Our Saviour, Montoursville, where he and his brothers served as crucifer and acolytes. He had worked at Dincher's Roadside in Tivoli, Picture Rocks Hardware, and then finally at Gary's Furniture in Picture Rocks before moving to Alaska to follow his dream of working with wildlife and living in the great outdoors.

Surviving, besides his parents, are his brothers: Collin and his wife Jessie, of Montgomery; Christian and his wife Lauren, of Ulster; and his sister, Claudia Davison, of Hughesville. He also leaves behind several aunts and uncles, three nieces, one great-niece, three nephews, and many cousins and friends. He was predeceased by his grandparents: Frank and Clara Worthington; and Bill and Lucille Harvey.

A celebration of Coray's life will be scheduled at a later date. Those wishing to make memorial contributions in his name are welcomed to send them to: Susquehanna Council of the Boy Scouts of America, Campership and Assistance Campaign, 815 Northway Road, Williamsport, Pa. 17701. The family would like to thank everyone who has already reached out with expressions of sympathy. Your many acts of unbelievable kindness have made this terrible time more bearable.
Published on February 13, 2020
To plant a tree in memory of Coray Allen Harvey, please visit Tribute Store.

Plant a tree in memory
of Coray

A place to share condolences and memories.
The guestbook expires on May 13, 2020.

A memorial tree was planted in memory of Coray Allen Harvey.  Plant a tree

Cindy Shaner
I'm so sorry to hear of Coray's passing. He was such a fine young man. Prayers for peace and comfort.
View all